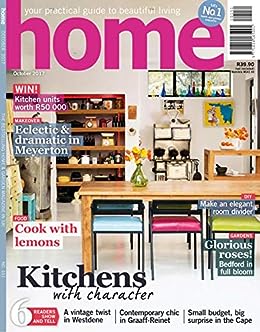 Then the major appliances started packing up. First the dishwasher
tripped the electricity, then a red light started flickering in the panel above
the fridge-freezer door with my Calvinia lamb thawing inside.
The technicians traipsed in and out. I had to leave piles of cash on the
kitchen counter because, of course, everything was COD.
Next, it was the washing machine. My housekeeper Margaret was there
when the expert came to investigate. Three minutes and R550 later, the
quote for the repairs to my 10-year-old machine was R4 000. A new one
(which would also save me water) would cost R5 000.
Margaret called me with the bad news, more concerned about the
dirty laundry than my budget. “But Wic,” she said, “that man is wrong.
You must come home. I used the machine and it didn’t trip again.”
I said I would check later but that for the time being she must leave the
machine off in case it started a fire.
That same evening, I put on a load of whites – ever hopeful – but within
minutes the house was plunged into darkness. The technician was right;
Margaret was wrong. And just after sunrise, when the furniture store truck
arrived at my front door, I was another few thousand rands poorer.
In relationships, they speak of the “seven-year itch”. My kitchen is
apparently suffering from a “10-year itch”. Because that’s how long ago I
bought everything new as part of a previous renovation. Let that be a
lesson: if you buy everything at the same time, it’ll all break down at the
same time, it seems. It was a case of ‘delusions of grandeur’ all those
years ago because, of course, my brand new kitchen just had to have all
new appliances!
Now only the tumble dryer and toaster have yet to quit on me. They are
on borrowed time, I reckon. And can I be sure that the stove, which is only
three years old, will last another seven?
Fortunately, every kitchen in this issue will last more than seven years
– check out our feature on page 46. I was particularly fascinated by the
kitchen islands which, over the years, have become such a core element in
open-plan spaces that it’s hard to imagine a kitchen without one!